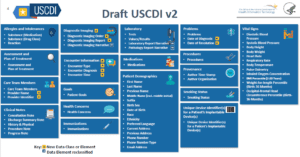 When you talk to people about healthcare standards, one of the biggest topics of discussion lately is the USCDI standard.  After ONC released v1 of the USCDI standard, many were interested to see how far ONC would take it when they released v2 of USCDI.  Some suggested that USCDI was too narrow, while others commented […]

“Playing Doctor” – A Cautionary Tale From Health IT Pioneers.

DNA Storage in a Yottabyte Era