Home Personal Care Biden Wants to Reopen Schools Within 100 Days. Here’s Why That Might Not Happen 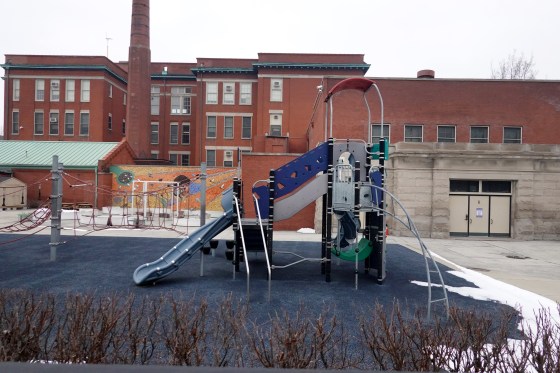 A cozy fire flickered in the background and the mood was friendly as Dr. Anthony Fauci met with the nation’s top teachers’ union leaders, Randi Weingarten of the American Federation of Teachers and Becky Pringle of the National Education Association, for a virtual “fireside chat” in late January. But the conversation was somber, especially when Weingarten asked the question she said is “on everybody’s mind” as Pringle nodded in agreement.

“What do we do now? How do we both stand up in-school learning,” Weingarten said, a reference to reopening schools as the pandemic rages on, “and keep people protected?”

That has been the recurring question since the coronavirus first shut down schools nearly a year ago in March 2020. As the second semester of this pandemic school year begins and the Biden Administration promises to get the virus under control, there is renewed urgency to figure out how to improve the state of education and safely bring more children back into classrooms. At the same time, the country has surpassed 440,000 deaths from COVID-19 and is facing the challenge of new variants of the virus.

Fauci reiterated President Joe Biden’s determination to open most schools within his first 100 days in office, something the President noted in his inaugural address, but Fauci added: “That’s the goal. That may not happen because there may be mitigating circumstances, but what he really wants to do is everything within his power to help get to that.”

Read more: Some Parents Are Demanding In-Person Schooling as the Pandemic Stretches On

Across the country, though, debates over school reopening continue to rage amid concerns about learning loss and the mental and emotional toll on children, and as some teachers’ unions demand vaccinations for educators before they are forced to return to classrooms.

In Chicago, the country’s third-largest school district started in-person learning for pre-kindergarten and special education students in January. It planned for more than 60,000 elementary and middle school students to resume in-person learning Monday, but the district remained locked in a disagreement with the Chicago Teachers Union. Members voted to refuse to return to school due to health concerns and called for expanded COVID-19 testing and vaccinations for educators first. The union also asked the district to allow more educators to work remotely if they have an immunocompromised family member at home. The district expects to start vaccinating teachers and other school staff in mid-February.

The Fairfax Education Association in Virginia has taken one of the strongest positions on the issue, petitioning for a continuation of remote learning until Fall 2021 and calling for vaccinations of staff as well as students. The Pfizer-BioNTech and Moderna COVID-19 vaccines are not currently authorized for children under age 16 and under age 18, respectively.

California Gov. Gavin Newsom’s $2 billion plan to reopen elementary schools for the youngest students starting on Feb. 16 faced pushback from some state legislators and school district leaders who said there wasn’t enough time or funding to implement the new health and safety requirements. The California Teachers Association also called on Newsom to slow the spread of the virus in the state and vaccinate more people before reopening schools, saying vaccines for school employees are “a key element to safe in-person school reopening.”

Some or all teachers in at least 23 states, the District of Columbia and Puerto Rico are now eligible to receive the vaccine, according to a tracker by Education Week. But the vaccine rollout has been slow, and just because teachers are eligible, it doesn’t mean they’ve been able to actually get the vaccine yet, due to limited vaccine supplies.

Read more: Biden Names a Former Teacher to Cabinet to Oversee Schools ‘In a State of Crisis’

With roughly four months left in this academic year, that lag has solidified concerns that many children might not learn in-person at all before the school year ends. “If we wait for the perfect, we might as well just pack it up and just be honest with folks that we’re not going to open for in-person instruction this school year,” Newsom said Jan. 28 in an event with the Association of California School Administrators, Politico reported.

The issue continues to divide parents, as some demonstrate in favor of school reopening and others raise health concerns. In many school districts, white parents have been more likely to opt for in-person learning, while parents of color have been more hesitant to send their children back into buildings, perhaps because of the pandemic’s disproportionate impact on communities of color and a lack of trust that school districts will keep their children safe.

Biden, who has pledged to work closely with educators and teachers’ union leaders on plans to reopen schools, has been careful not to criticize teachers who refuse to return to classrooms. And on her first full day in the White House, First Lady Jill Biden, a member of the National Education Association, hosted a virtual event with Pringle and Weingarten.

Biden issued an executive order during his first week in office directing the Education Department and Department of Health and Humans Services to provide clear reopening guidance and share data and best practices with schools — something experts had criticized the Trump Administration for not doing. Biden also called on Congress to direct at least $130 billion to schools and $350 billion to state and local governments to help prevent school layoffs, close budget gaps and fund COVID-19 testing and supplies.

Since the beginning of the pandemic, the debate over when and how to reopen school buildings has involved a careful negotiation between the fact that the youngest children are less likely to get seriously sick from the virus, but teachers and other school employees are just as susceptible as any other adult. Public health experts have long said that safely reopening schools depends on getting the virus under control in the community at large.

An article published on Jan. 26 by researchers for the Centers for Disease Control and Prevention in the journal JAMA concluded that the “the preponderance of available evidence” shows the virus did not spread rapidly in schools in the Fall, as it did in nursing homes and meat-processing plants. The article said schools can reopen safely, as long as mitigation measures are in place, including requiring face masks, increasing physical distance in classrooms, preventing crowding, improving ventilation and using testing to identify and isolate coronavirus cases. The article suggested that communities restrict indoor restaurant dining or indoor school sports in order to enable in-person learning.

Health IT: Buy or Sell – Healthcare IT Today Podcast Episode 91

How IoT Medical Devices Save and Improve Lives